The last post/blog, not sure what you call it, I wrote, probably wasn't the most upbeat ever. It had to be written tho. So this one, is gonna be very upbeat.

In 2016, while being a member of a local, Kingston upon Thames, Facebook group, I saw a picture of a lady wearing a hat. Nothing special, many women wear a hat, you may say. However, there was something that gripped me. Long story, making it shorter, we both became member of another local Fabebook page/group due to the original one being closed. Finally, on Sunday the 19th of June 2016, I found the courage to send her a friend request.

12 months minus three days later, we got married in Kingston. It was a rocky but amazing road to get there.

She is, my best friend, an amazing, kind, loving and caring woman. Just a random picture of the woman who changed me for the better.

Liz, I love you more than words can ever say. Thank you for always being there. Your term of endearment (well I hope) is I'm your fuckwit, as I'm far from perfect. But I will always be there for you, whenever you need me. I'm immensely proud you are my wife.

I will miss you like crazy in the 2018 MdS, but you, my mermaid, will get me through it. 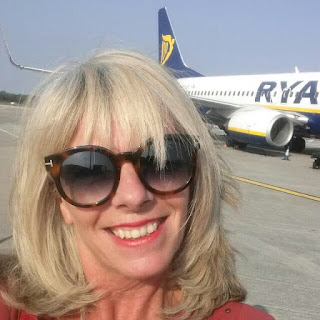 Posted by MichielHoefsmit at 03:28 No comments:

Thoughts during the long stage at the MdS. Thoughts about people who suffered way more than I did.

2013 - It's very hot today. Very hot, c. 45-50 degrees in the sun without shade. It's when I got overtaken by Zoe, my friend, tent mate and a-class photographer. It's also when I met Laurence Klein, 3 times ladies winner, who hadn't managed her water and food and ended up in a tent and dropped out.
About 40km in, I decided to go through to 60km of the I believe 75-80 end stage and have a rest.

Main thought during the night was a friend of my sister who was early thirties and had recently died of cancer. Leaving behind her wife and little kid. So, hot, cold, pain, uncomfortable, I was alive. I looked up to the sky a number of times, mentioning her name. She was a runner as well. I had known her as she and my sister had been friends since about the age of 6.

2015 - 92km I believe it was. About a year after my fathers dead. Going through the dunes at night with Leigh, where it felt like we were near the beach but no sea. It was cold, very cold. I think I used the word fuck about every 3 meters if not more often.
My feet were painful, it turned out a bandage to protect a blister was to tight and restricting blood flow. When I took it off at the 60km point, where they served tea, that is how cold it was, it felt a lot better
My dad died the year before. Due to vitamin deficiency in WWII he had a hump and always had issues with his knees. So, I figured, my suffering was only temporary and therefor I should shut the fuck up complaining.


2018 - distance to be found out.  This year, there will be other people on my mind. My uncle who died recently after losing a battle with cancer. My old neighbour who I used to call uncle. He was a colleague of my dad in the garage where they both worked. He has been diagnosed with cancer and is incurable.
The third but very important person is my sister who got diagnosed with breast cancer this year, which has spread to her lymphs and two bones. She is now undergoing therapy.
The last but not least, my mum, 87, who got mugged in her own home recently and obviously is very concerned about her daughter.

So if it's cold, hot, painful, uncomfortable out there. There will be people suffering or have suffered more. The fact you are there moving, means you are alive.


Charity link
Posted by MichielHoefsmit at 15:05 No comments:

To Children With Love - My MdS Charity

This episode will be introducing my chosen charity for the 2018 MdS.

The founder and managing director is a lady called Debbie Deegan. Debbie is a personal friend, I met her through my wife, Liz Hoefsmit (was Cusack). Liz and Debbie met when they were 10/11 and have been friends ever since.

Debbie has been working tirelessly in Russia since 1998 with the orphaned and abandoned children of the Bryansk Region and more recently with children in Kaluga, Tula and Moscow Region. Debbie is also the Chairperson of the Russian registered charity To Children With Love in Russia. This is the sister charity of To Russia With Love that strives to raise funds in Russia itself.

Mission Statement
Our goal is to support young people to achieve their full potential in education, employment and life.
Social exclusion and educational inequality negatively impacts the lives of young people reducing their self belief, dignity and well being. Our targeted programmes enhance young people’s self esteem, life skills and qualifications helping them to forge fulfilled lives within their communities and beyond. Our programmes have been developed over a 20 year period working with young people nationally and internationally.

This episode will be introducing my chosen charity for the 2018 MdS.

Donations via this link

Training is going reasonable. It'll be a slow edition this year. But that is fine with me, as I want to enjoy the Sahara even more than the previous two editions.

Posted by MichielHoefsmit at 22:10 No comments: