Kingston Sunday Morning Garmin Run 13 October
The first one is the twice a year 8.2 mile / 13.1 km run from Kingston Market place via Kingston Bridge to Hampton Court on the Thames Path. Cross Hampton Court bridge and back to Kingston. It was my first organised run ever and despite keep on saying I'm done doing it, I keep on going back. Well, it starts outside my house, 5 minute walk.

This year I was doing it with Nasreen Suleman. A lady who does mountains GR (Great Routes) walks around the world. So as I had Bournemouth Marathon week before and Amsterdam week after I wasn't going full out. Which was notice-able as due to unknown to me reasons the route was only 7.85m/12.6km but it still took me about 1:09 to run. While my PB on the longer distance is 59min.

But it was nice running it with somebody, not so nice it rained. But I believe Nasreen beat her own time, and beat her 10k PB the week after. Which I think she set on 51 min, which is faster then mine.

At least a medal and not a mug. Colin B was there, racing around 16 miles, unfortunately didn't catch up.

Amsterdam Marathon 20 October
On Saturday it rained and rained. I stayed in the Amsterdam Hilton 2 metro stops from the Olympic stadium. Decided on Saturday to check out the metro and find a way for a ticket. Well one machine, with one family struggling to work it out. I was lucky by being able to borrow an entrance. So to the stadium where I could buy a 24 hour ticket. Which worked perfectly. Next morning, long queue for the one ticket machine. Think some work to do the organisers and the Amsterdam Public Transport there.

I visited Joop and Anke Keizer. Joop since he and I met on a dark beach in a car (nothing dodgy) have become good friends. The man is a legend. 72 and runs a marathon just around 4 hours. To then be interviewed by young pretty tv people. You gotta be lucky :-)
Honored to be on Joop and Anke's boat. Which conveniently moored just outside the stadium.

We started in the same box but not met / caught up till the end. It was a really great start and finish in the Olympic Stadium. And the weather was great, sun out, no rain, and a lot of support. Going through the town of Amsterdam was very nice and worthwhile.

I bumped into Danny Kendall (not really) while he was racing the other way and I'm sure my cheering helped him achieve his 2:37 PB. Or at least so I tell my self.

At the end in the Vondelpark my daughter Kim was there with her mother Ineke and her mom's boyfriend Rene. Cheering me on. Which I needed and did help push the last 3km.

Kim is a runner as well, 15 years and doing well. Going out by herself and liking the run for the run.


Small roll up looking back
Last year this time we were meeting up almost without fail on Sunday mornings as it was part of the 2013 Marathon des Sables training regime. That is now 6 months ago nearly since we finished it. If I ever had a dream doing an event, this was it. And I really hope being back in 2015.

I met a lot of great people there, in a sandpit 4 hours flight way from London.

Picture below is from the beginning of the Amsterdam Marathon when we run under the Rijksmuseum. It's the place that holds the world famous
De compagnie van kapitein Frans Banning Cocq en luitenant Willem van Ruytenburgh  - De Nachtwacht
The Company of captain Frans Banning Cocq and lieutenant Willem van Ruytenburch preparing to march out - The Nightwatch
So called as it's very dark painting, by Rembrandt. 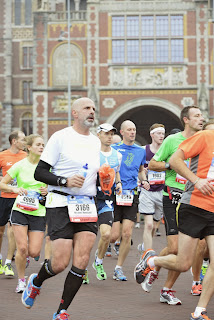 Posted by MichielHoefsmit at 07:39 No comments:

On Saturday 05 October, Wayde and I set of to an adventure that brought us to the town of Bournemouth. There was a running festival and we would participate in the Marathon.  Fair to say it looked great, at pier for the finish.

We checked into our hotel the Trouville. Build in the 70's or earlier, but not sure what century. But it was clean and for £40 pppn, who cares.
The parking lot was full, the interred red and black. And the elevators well, they were there as well. Bit if you participate in this event, I recommend it. En route directly out of town when done.

We set off exploring this wonderful town and find something to eat. As you do you carb load. So I had a number of beers and the most bland pizza ever in Pizza Hut. Where you get unlimited salad. For those of you who have ever seen Going for an English, this pizza could have been in there.

As said the finish near by the hotel, the bus to the start near by as well. And Bob's your uncle (whatever that means).

So up the next morning, breakfast. No complains there either. Coffee, and all the trimmings you would expect from a sea side hotel. But I just had yogurt and some toast.

We were joined by John and the 3 of us set of in the sunset to the startline.  Pink and Green, we represented. Those are the times we believed we would do.

Well that's when it all went wrong. Well for John, it probably went reasonably but he hurt his bum-cheek. Not sure what he did, but am sure he finished it.

The event, was fun, but could have done with the following;
Not just gels every 3 or so aid station
Not just water every aid station
Fruit, salty stuff, electrolyte drinks were not there. As it went way of 20 degrees and the sun was nice and burning, a lot of people seem to struggle.
Don't get me wrong, it's good event, but you would have thought they would have covered that. But, read the website and it does say clearly what they would provide. And they did exactly that. Luckily I had 4 Zipvit bars. And a great breakfast, sort off.

So much for now, Kingston Garmin 8.2 miles on Sunday 13 Oct, then Amsterdam Marathon Sunday 20 Oct. Then hooray. Season is over. Less running, more gym/weights.

Posted by MichielHoefsmit at 19:35 No comments: