I think I am ready. I had a hard session in the gym today, and couldn't walk the stairs afterwards. I also had a number of good runs and bike rides. I will note bore you all with how long, how far, how fast.
I understand a number of my MdS compadres will be at the the SDW100. Which should be fun. I think I worked out logistics getting there. Getting back hopefully will be sorted next week.
I may have stated this before but SDW100 is a 100 mile/160 km race between Winchester and Eastbourne. And you have 30 hours to finish. It wouldn't classify as a walk in the park as we are nowhere near a park.
After this, I will have some rest and nothing booked until October 6, 13 and 21. Oops that is 3 weeks in a row. Just two marathons and an 8.2m/13.2km in between.
I must say I really look forward to this SDW100. Not sure why, but the weather seems to be heating up and with a bit of luck, it will be more than  degrees even going through the night. If not well hey, we'll get wet.
As it is two weeks, this will be the last post about it, as the rest will be some more running and other stuff. Not that exciting to read/write about.
My next one will go about the exciting Planet ULTRA and a hot place in the Mediterranean. But more about that next time.
For now, speak soon.
M
Posted by MichielHoefsmit at 14:57 No comments:

What is the relevance, for me, of the Centurion Running South Downs Way 100 miles event. This starts in Winchester and finishes in Eastbourne following the South Downs Way.

1) If finished within 24 hours (my aim) than you will get the 24 hour - 100 mile buckle. This is the standard for the great 100 miles runs across the world.
2) If finished within 30 hours (the cut-off) and this would still make me happy I will qualify for:
3) Western States 100 Endurance Run - WSER the mother of all 100 miles (my words).
4) I will have 7 Ultra-Trail de Mont-Blanc - UTMB - 160 km run in the Alps, covering France, Italy and Switzerland.
5) I will just be happy to finish it and have this under my belt.


It's still part of my personal quest. I still whole-heartedly support Myfanwy Townsend Melanoma Charity, but I'm now focussing on running for myself for a while. This may sound selfish, and maybe it is, but it is what it is.
I will do other things with the charity to support them.

In two years time, 2015, I will be doing the MdS again (her 30th birthday so hope I get in) and may run for charity again.

It is interesting, the difference of events people I met in the Marathon des Sables are now choosing as their next event.  But about this later.

This short blog is just to explain UTMB and WESR to people.


Posted by MichielHoefsmit at 21:31 No comments:

It's 36 days from now (15 June) that the South Downs Way 100 starts. For those of you not in the know, this is a trail / path between Winchester and Eastbourne in the South of England and is 100 miles (160 km) long. The event organised by Centurion Running and the intention is to finish it within 30 hours.
It starts the 15th June at 0600 so you should be done by the 16th of June 1200. If you finish within 24 hours you will get the buckle that proofs you did it in one day. Which is what I am aiming for, but if I finish in 29 hours and 59 minutes I will be equally happy.
Why do I want to finish in 24 hours? This would enable me to register for Badwater Ultra and/or Spartathlon.

The above picture is courtesy of http://www.britainexpress.com/countryside/national-trails/south-downs.htm

I believe that I have secured a pacer for the last 30 miles. Thank you Wayde.
I also believe I've secured a sleeping place the night before. Thank you Jackie and Ollie.
I now need to work out how many dropsbags and what to put in them.

Tomorrow the Transvulcania starts in Las Palmas and like from last weeks runners in the Giant's Causeway I will draw motivation from that. As well as all the stories that you can leave on my Facebook page or in comment of this blog. Or twitter them if you are a person of few words.

Interestingly is that finishing the SDW100 would give me 4 UTMB points, together with the 3 from the MdS I can actually enter the ballot. Which I may do. UTMB, despite being iconic it is not really on my list at this moment in time.

So as it's called preparation, what am I doing:
I've so far secured a pacer from mile 70. Which is important as it's 50K to go through the dark.
I've been running on the South Downs Way, Winchester side twice now c.10 mile in. So that part I'm comfortable with.
I hope that I can actually do some running at the Clayton Windmills area as that is the last 30 miles, which means when it's dark and it's the where people get lost part.
I've been running in the hilliest (not very really) parts of Richmond Park, but if you run up and down them enough, it will start to hurt. And it's around the corner, Clayton Windmills is 70 miles and Winchester is about 40 miles so quite a distance for a run. But very beautiful, so it's worthwhile going there.
And I just run, or swim or go to the gym. Whatever, makes me get up and move.

For the rest there isn't much I can do. But I'm drawing motivation from others, as I said.

So for now, going to watch some tv and rest.


Posted by MichielHoefsmit at 18:50 No comments:

Sharing a room in bunk beds. Ty, Jake and Mark. We had a four one but he disappeared. A very good event, weather not great but the runners seemed happy. Standing around or making pictures not so great. The light for pictures was not good, I was told.

As I never been to the Giant's Causeway didn't know what to expect. Very beautiful, like shaped by men, but created by nature, however men could not create this.

I saw most runners at the Giant's Causeway where they had to go up a very long slope to be finished of by a steep pair of stairs. They were hurting that was clear.

Then back to the last feed station at Dunseverick Castle to take more pictures and provide more moral support.

Finally back to the finish where I drove some of the exhausted athletes back to their hostels. It was good to see so many people finish. It was a hard day, due to the weather and the course. But as they say themselves no pain no gain.

The last person, Eric, blade runner arrived just before 2300 having run his first 25k ever. Very impressive result and Eric was very happy.

This I guess is why supporting is almost as good as participating. Seeing people reach the next level and the fact they appreciate the support.

But support on a long run like this is hard, harder than expected.

Both a good day, and wouldn't have missed it for the world. Met some great people and it is time now to go back to the airport.

Posted by MichielHoefsmit at 08:10 No comments:

The rains have stopped and the big yellow ball aka the sun came out.

At 0945 the 25k and a 50k runner are enjoying breakfast at the Fullerton Arms.

In a moment Erik and I will go set up the 50k start near the ropebridge in Ballintoy.

Lots if pictures with the pro pix from Ian Coreless.
More later.

Posted by MichielHoefsmit at 09:40 No comments:

I arrived at Belfast City Airport. Leaving the sun in London behind for the rain in Northern Ireland. Great planning, not! Drove from Belfast to Ballintoy via Ballycastle. Had a nice lunch in Ballycastle.

Ballintoy is a street with pubs and sleeping and eating places next to the Giant Causeway. There is not much else. Ballycastle actually has a bit of a city centre.

Sitting in the Sheep View Lodge. People start to arrive. Mainly USA so far. It is going to be fun, I am sure of that.

We are in a hostel, sharing bunk beds. Like when we were young.

So far the weather cleared up, but as I am not running, don't mind that much.

Good learning of things to change and improve or keep as they are.

So,we have toilets, running water, towels and food cooked. Not bad, after a week camping in the sand.

Tonight we all will be informed of things to come. I hope. More tomorrow. 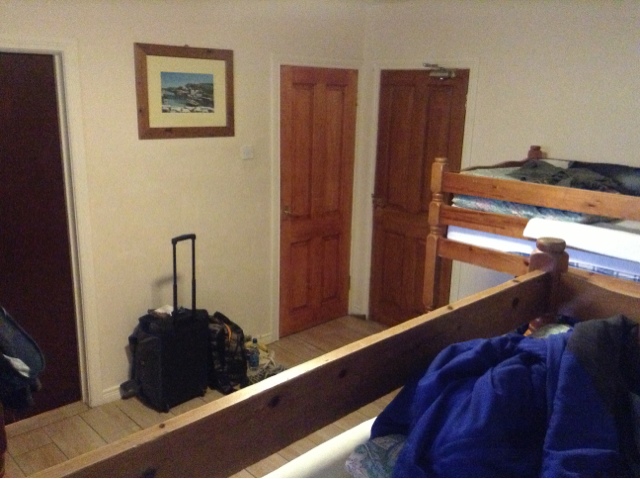 Posted by MichielHoefsmit at 17:00 No comments: